I’m nostalgic for a moment I never lived through – when we were concerned enough with monopolies over access to information online that not only did we call the competition between Microsoft’s Internet Explorer and Netscape Navigator a “browser war,” but there were even competitions such as the Amsterdam-based “Browserday” to design new, innovative browsers.

Nowadays, while there are a few more choices for browsers and still many reasons to be concerned about how our experience of the Web is being framed for us, search engine algorithms are the new, more obvious information gatekeepers. In fact, the 21st century version of Internet Explorer’s monopoly is now so obvious that it’s nearly no longer noticeable, for when we search for data on the Web we are no longer “searching” – instead, we are “Googling.” And so, in line with what Siva Vaidhyanathan calls “The Googlization of Everything,” a new mode of writing is emerging that I call (in the postscript to my book Reading Writing Interfaces) “readingwriting”: the practice of writing through the network, which, as it tracks, indexes, and algorithmizes every click and every bit of text we enter into the network, constantly reads our writing and writes our reading. This strange blurring of, even feedback loop between, reading and writing, quite simply signals the end of literature as we’ve known it. It is the Googlization of literature. And readingwriters (such as Darren Wershler, Bill Kennedy, Tan Lin, and John Cayley/Daniel Howe) who experiment with/on Google are not simply pointing to its ubiquity; they are implicitly questioning how it works, how it generates the results it does, and so how it sells ourselves and our language back to us.

The impetus of this literary critique of Google is clearly aligned with that of early works of net art such as the “Web Stalker” from 1997 – an experimental web browser or piece of “speculative software” created by the art collective I/O/D (consisting of Simon Pope, Colin Green, and Matthew Fuller). “Web Stalker” essentially turns the web inside-out, presenting the viewer/navigator with the html code of a given page and all links leading to and from the page are presented to the viewer as a visualization. It is an artistic tool for drawing attention to the limits and possibilities of a particular reading/writing interface, the web browser. As co-creator Colin Green put it in a 1998 interview with Geert Lovink, “[b]rowsers made by the two best-known players frame most peoples’ experience of the web. This is a literal framing. Whatever happens within the window of Explorer, for instance, is the limit of possibility.” The foregoing is then followed up by Matthew Fuller’s clarification that “Web Stalker” “is not setting itself as a universal device, a proprietary switching system for the general intelligence, but a sensorium – a mode of sensing, knowing and doing on the web that makes its propensities – and as importantly, some at least of those ‘of the web’ that were hitherto hidden – clear.”

Since “Web Stalker” was created sixteen years ago, and runs only on Windows 95 and Mac Classic OS (which in turn usually requires an equally obsolete dialup connection), it’s fairly difficult to get it running and there are also very few high quality images available of it online. Thankfully, Matthew Fuller generously provided me with images which I’m making available here. If you have the technical know-how, you can still download “Web Stalker” here and get it to write a reading of the Web like you’ve never seen before…or at least, not seen since the late 90s. 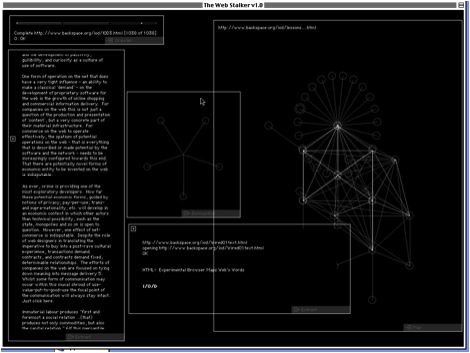 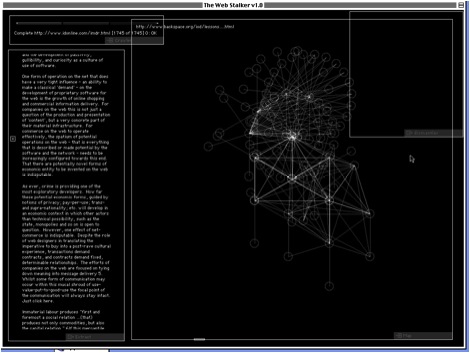